Shot Placement: Most Targets are Wrong

It has been 25 years since the North Hollywood Bank Robbery (or Shootout), depending on the story you read. During the immediate aftermath of that event, “shot placement” was high on the list of topics for police officers and their trainers. Pundits and writers compiled myriad pieces where the terms “Failure to Stop” and “Mozambique Drill” were common themes.

In the aftermath of North Hollywood, many in the law enforcement community pointed to the fact that the police were “outgunned” and the solution offered was a hardware upgrade. This is not surprising as the common response from every government entity is to solve problems by spending money and buying new stuff. However, is spending money and buying things truly the best way to address training or performance issues?

Regardless of the make or model, caliber or bullet design, at the end of the day, handguns are considerably poor fight stoppers when it comes to deadly force encounters with violent felons. Justifiable use of deadly force is about “stopping” not about “killing”. We use handguns because they are the most reliable tool available for all people; men and women, young and old, strong or frail. Sam Colt called them the “great equalizer”.

The previous paragraph might seem rather contradictory. We carry handguns because they are an equalizer, but the handgun we are carrying is a poor man-stopper compared to a rifle or properly loaded shotgun. This situation is naturally based upon convenience and civil society. No one in a civil society wants to live in a world where everyone is walking around with rifles. Unless you live in Chicago, NYC, or New Orleans, the chances that you will need to use a gun to defend yourself on a daily basis are low. Therefore we carry handguns, just in case.

Many years ago, we at Student of the Gun, explained the three (3) types of threats posed by violent felons or armed criminals. A Type 1 attacker, when met with resistance in the form of a firearm, will surrender or flee out of a sense of self-preservation even though they have received no injury.

A Type 2 attacker will flee or surrender only AFTER they have received an injury. Career criminals use guns and see guns all the time, a good percentage of them do not fear the sight of a gun. However, the reality of physical injury may cause them to withdraw or surrender and beg for medical attention.

A Type 3 attacker will not cease their assault, regardless of the defender being armed or sustaining some type of injury from said gun. The attackers in the 1986 Miami Shootout and the 1997 North Hollywood Bank Robbery are likely the most famous examples of Type 3 attackers

Both the Type 1 and Type 2 attackers surrender or flee based upon a psychological decision, they make the mental choice to cease their attack. The Type 3 threat cannot be stopped psychologically, only physiologically. It is only after sustaining sufficient physiological damage that the Type 3 attacker will stop their deadly assault.

The good news is that there are far more Type 1 and Type 2 attackers in the world than Type 3. The bad news is that when faced with a deadly force attack, the defender will not know what type of threat they are facing until AFTER the fight has concluded.

This brings us back to the use of handguns as life saving tools. How does the defender prepare to deal with all three types of attacker with a tool that is a poor man-stopper?

Despite constant attempts to reinvent the wheel by both firearms and ammunition manufacturers, there is no magic caliber nor is there a magic “one stop” bullet. Yes, there are absolutely high quality forms of ammunition and projectiles. Nonetheless, a handgun will always be a distant second to the rifle when it comes to effectiveness in stopping deadly threats.

When we consider what our threat is; a homosapien, we need to examine the human machine and how it works. Psychological stops aside, a rampaging human animal will only stop attacking when one of two things occurs; fluid loss (blood pressure) or central nervous system interruption. When humans bleed, they begin to lose blood pressure and oxygenated blood to the brain and muscle groups diminish. However, humans have built in defense mechanisms designed to aid them in pushing through and surviving such physical damage.

We address this situation by considering our shot placement. Simply striking an attacking human animal anywhere on their body is not an effective tactic. Instead we concentrate on putting our handgun bullets where they will have the greatest effect. Some twenty years ago I was introduced to the term “thoracic triangle”. 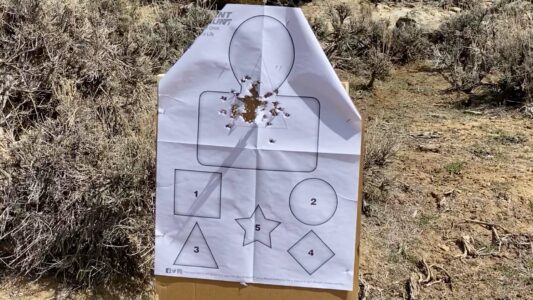 Gotta know where to put ’em

What is the Thoracic Triangle?

The Thoracic Triangle, as it was explained to me, is formed by drawing an imaginary line from the bridge of the nose down to the left nipple, then over to the right nipple and then back up to the bridge of the nose. As my instructor explained, everything in that triangle is relatively important and hitting it with bullets will cause “quite the consternation in the recipient”. No, we are not praying for one-shot stops, but we also want the human monster who is attacking us to notice that we are fighting back. Rapidly placing projectiles into the Thoracic Triangle is a great way to encourage them to fornicate in another direction.

If you accept that putting hits with handgun bullets in the Thoracic Triangle is a good thing and a worthy endeavor, we must ask ourselves whether or not that is what we are practicing? Does your training and practice regime include targets that encourage you to put all of your shots up in the TT or is the “X ring” or bullseye in the middle of the torso above the belly button?

The issue with training and practice is that we default to whatever we have mastered, done the most. From the police perspective, for every time the shooter is instructed to make a headshot, they have fired a hundred rounds “center mass”.  Over a career, a cop will make thousands of center mass torso shots and a relatively small number of deliberate head shots. Should we be surprised that, despite their rounds not stopping the fully armored North Hollywood Bank Robbers, that officers kept firing and center mass rather than slow down and take headshots?

If you are a small arms and tactics instructor or just a dedicated shooter, you can take a standard cardboard silhouette target and a black marker and create a TT style target. When the time came to create a target that would carry the Student of the Gun name, we deliberately designed it with a TT inside the half-silhouette portion. Naturally, you can purchase the SOTG Skill Maintenance targets from our website.

The choice, as always, is yours to make. You can be satisfied with average or “good enough” training and practice or you can decide that you want to be as prepared as possible to come out the winner. Remember, you are a beginner once, a student for life.