An informative Safety Briefing is important. I just finished reading a news story about a “role player” who was shot during a police training exercise. A live, loaded firearm was introduced into the training scenario where it should not have been. We have been preaching for years and years that only designated training guns should be used in force-on-force scenarios and real/live guns should not be used in classroom environments. Despite this, negligent shootings keep happening.

This got me to thinking, how many forms of safety advice that we have given over the years are being ignored or have not been passed down to new shooters. One of the big ones has to do with the fumbled gun. 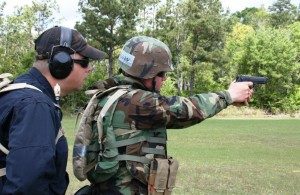 Dead for No Good Reason

While I was working as a Small Arms and Tactics Instructor for the US Military, a man, who was training under the same command for which I worked, died during a negligent shooting incident. (It did happen on my range) As per SOP, an all hands Safety Stand Down occurred and the staff was briefing on the details of the incident.

The man in question was participating in a pre-deployment pistol qualification. During the portion of the course where shooters were required to swap the gun from their dominant hand to their non-dominant hand, the shooter lost control of the M9 Beretta and it began to fall. Rather than let the gun continue to fall and hit the ground, the shooter instinctively snatched at the gun. As he grabbed it, the gun was inverted. One of his fingers or a thumb hit the trigger and the gun discharged. A single bullet passed straight through his heart and he was dead before they could get him off of the range.

Despite the Range Safety Briefing…

Despite the Range Safety Briefing being two pages long, nowhere in the briefing were shooters instructed to let fumbled guns fall. As a matter of course, shooters on military ranges are punished and embarrassed in front of their peers for dropping a gun, pistol, rifle, etc.

Embracing “institutional stupidity”, after this tragedy, we instructors were advised to be sure every shooter had plenty of time to “dry-fire” and “warm up” before firearm qualifications. How in the world dry-fire and warming up can override gravity I do not know. When I left that command, they still had not inserted “Drop all fumbled guns” into their Safety Briefing.

What I discovered first hand from working every day of the week with these kids was that we have largely failed to prepare them for the rigors of adulthood and civic duty.

– From article: 3 Methods to Prevent your Son from Becoming a Pussy

In addition to going over the 4 Universal Firearms Safety Rules, all shooters on all live fire ranges must be told, given permission, to let a fumble gun fall. Drop it! A fumbled gun is not intentional, therefore it cannot be anticipated. The world is an imperfect place and gravity is a law.

All modern firearms are equipped with drop safe devices. However, if a finger or thumb ends up in the trigger guard and the trigger is pressed, the gun is going to discharge. The gun is not wrong, the person is wrong. When a person has been conditioned that they will be punished or ridiculed for dropping a gun, the stage is set and there is no time to rethink the situation.

The only way to override this institutional or societal conditioning is to give shooters permission during the Safety Briefing to let a fumbled gun drop. Remember, the fumbled gun is unintentional therefore punishment and ridicule only compound the hazard. No amount of dry-fire or warming up can overcome gravity and that split second where the grip on the gun is lost.

Safety on the Range

We Can Do Better

Very rarely is an injury or a death due to a negligent discharge unpredictable or without cause. As I mentioned at the beginning, role players being shot during training exercises has happened before. The only reason it keeps happening is because the people who should no better refuse to take the proper steps to keep it from happening.

If your Safety Briefing does not address the fumbled gun and the instruction to drop it, injuries and deaths from that very thing will continue to occur. I once knew the name of the man who died at my training command. Sadly, time has erased that information. However, if we refuse to learn from mistakes, men such as the one I speak of here, will have died for no good reason.